Yet another old computer.

This one has broken into geek culture recently, via AMC in the form of the tv show Halt and Catch Fire.
Yes, of course, it’s the Compaq “Compaq”, affectionately known as the Compaq Mk1 or Luggable. It’s about the size of a sewing machine, and has about the same processing power as a modern computerized one, too.

It was another rescue machine, like the TRS-80. I decided to bring it home. Connected to a long extension cord, I powered it up to see what happened.
Yes, of course it went bang.

Several tantalum caps exploded. Those things go off like firecrackers. Cue the strip-down of the device. 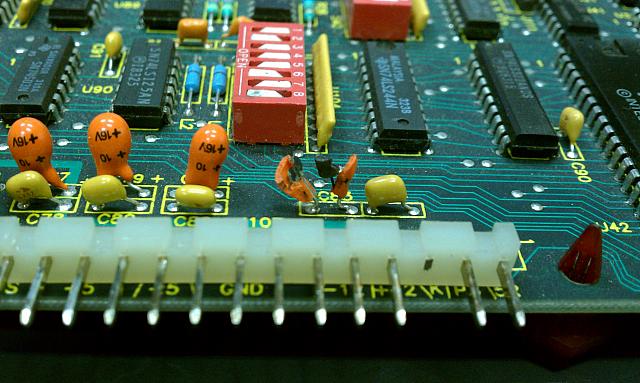 I’m actually quite impressed with the layout of the machine. It’s fairly easy to work on, considering how compact it is. (No, Compaq is an amalgam of Compatibility and Quality). 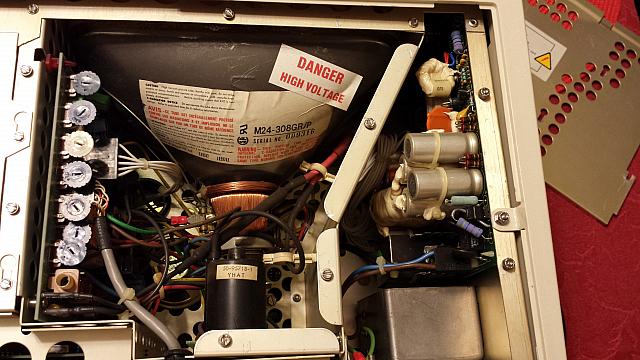 There’s the high voltage cage that contains the monitor, and to the right the power supply that runs the entire shebang. It’s the highest powered, smallest switch-mode supply of the era, apparently.

With the exploded capacitors on the board replaced, I decided to use an external power supply to bring the motherboard to life. Connected up to a TV set’s composite input, I present to you the first signs of life in many years! 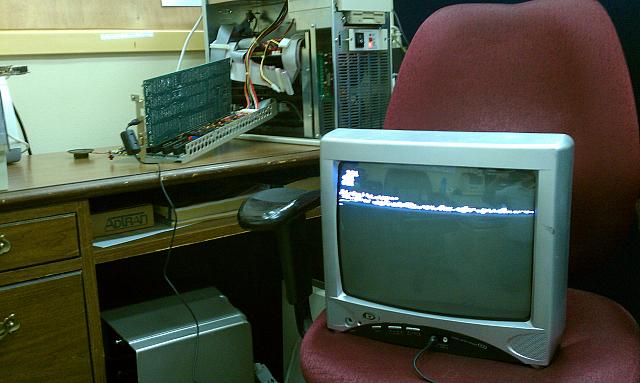 After a fair bit of hunting about to find out what the DIP switch settings do on the motherboard (there’s two banks of 8 switches each. One sets things like floppy disk drive numbers, graphics display mode etc., and the other is for memory size, which the BIOS completely ignores), I powered it up in the chassis. The readable version of what it was trying to put on the TV screen. The video card needed a little work 🙂 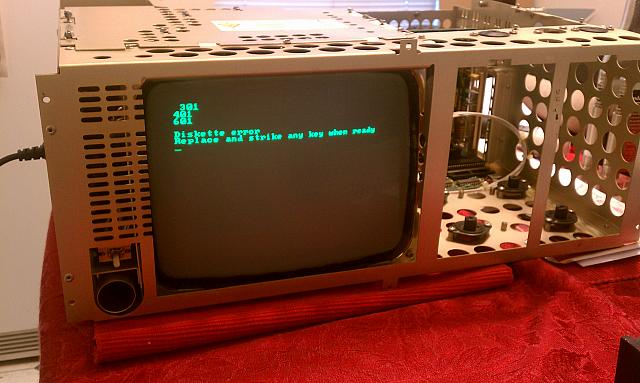 Multitude of error messages- no keyboard, various other memory problems and so forth. I think those are IBM error codes.

Now.. this machine was upgraded over the years by the looks of it. We’re talking some real high dollar items- a Hayes 28.8 dial-up modem, a 21Mb Plus HardCard hard disk drive and a Diamond Flower multi-function card (includes RAM, real-time-clock, serial ports, parallel port and game adapter). By default the computer came with a single card instaled- the CGA-compatible video card. It has input for a light pen.
The floppy drive controller card also has a parallel port built in. That was an optional extra. Not the parallel port, the floppy drives and controller card. 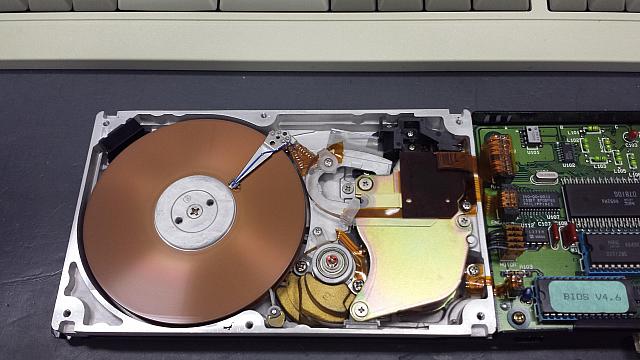 The hard drive is plastered with all the usual “removal of this sticker will void warranty” labels. It came apart, because the rubber bump-stop had dissolved and turned into a sticky tar that the arm kept getting stuck to, and the optical location sensor (the pale grey glass piece attached to the arm at the top) was filthy and wasn’t working properly.
With the bump stop repaired with a piece of my aquarium’s bubble-stone pipe and the rest of the optics cleaned up, the seek time was back to factory spec.

It has bad sectors. So what, deal with it. There aren’t any more appearing. The RAM likes to go bad more than the hard drive.

I got it all powered up and discovered the keyboard didn’t work. Took it to bits and found that it’s an odd design- aluminized Mylar discs are brought plastic-side down towards two pads on the PCB. The change in capacitance makes the circuit register the keypress. Unfortunately years of being stored in Louisiana’s humidity had made the Mylar discs disintegrate. I discovered that I could type by touching my fingers to the PCB. 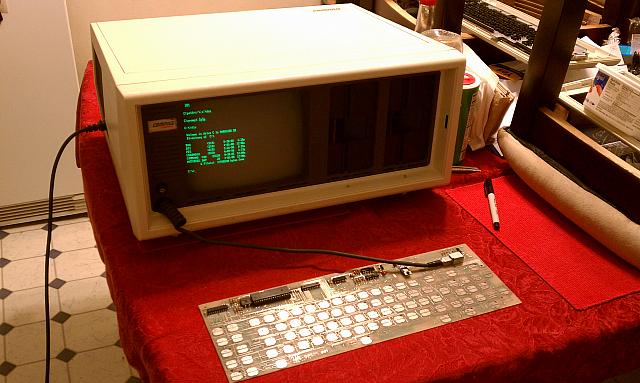 Booted up into DOS.. it was useable, despite making my fingers tingle. Strange circuitry, for a keyboard, despite seeming to have a standard AT (with proprietary connector) interface to the motherboard. 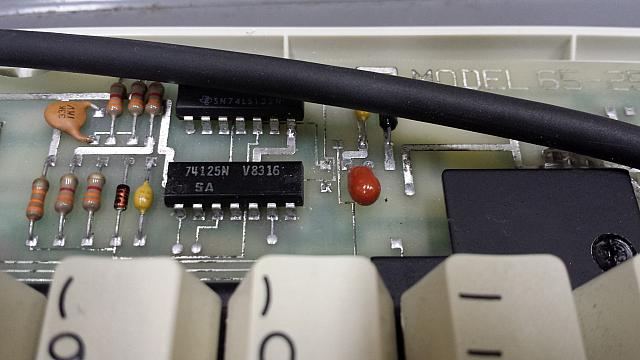 Someone’s had a go at it before. Decided ultimately that the keyboard needed a case, so I bought a foil thermal blanket from Academy Sports, a pot of wood glue from Home Depot and a foam sheet from Michael’s (beginning to sound like a commercial advertisement), and set about making silvered foil discs: 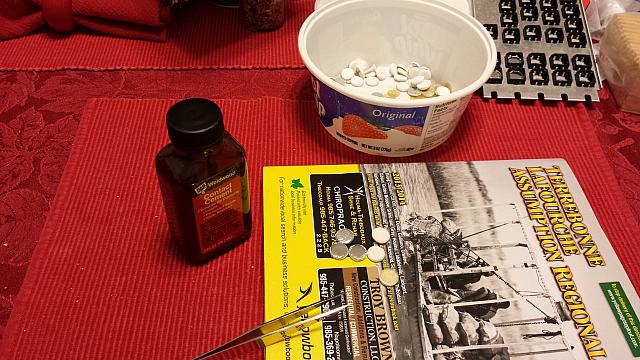 And began the horrible task of putting them into the keyboard: 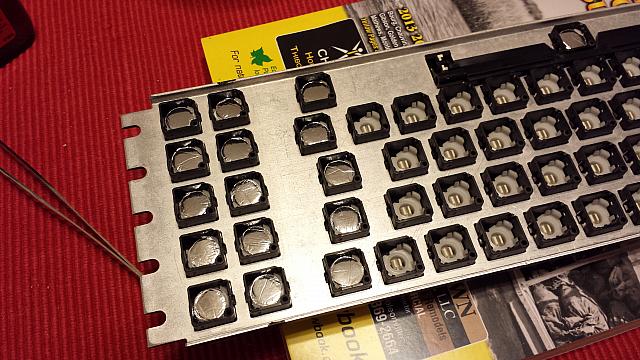 It’s not great, but it does work. That allowed me to get it all together and start using it as a computer. 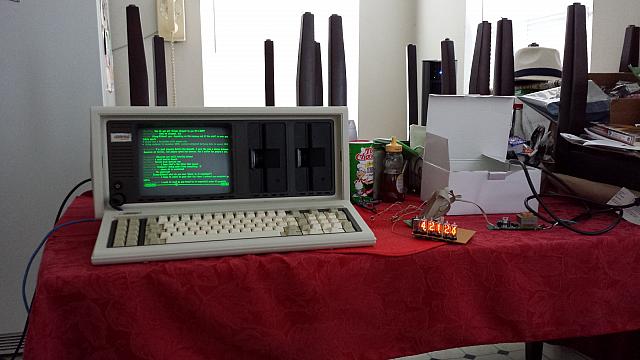 (My Nixie clock making an appearance.) 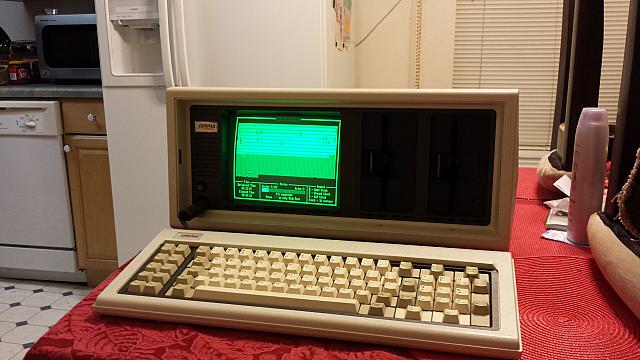 (Norton Disk Doctor. The de facto standard for so many years.) 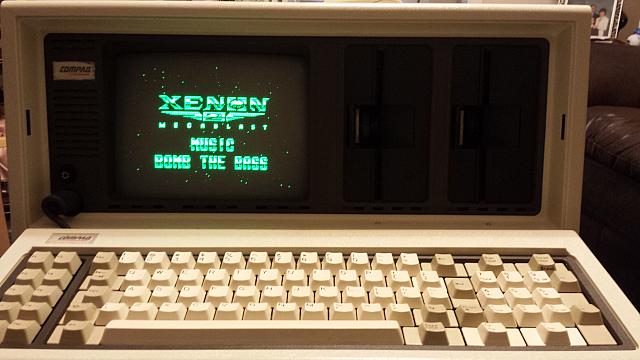 Got my niece and nephew interested in it also. They were fighting over the keyboard to play Reader Rabbit. 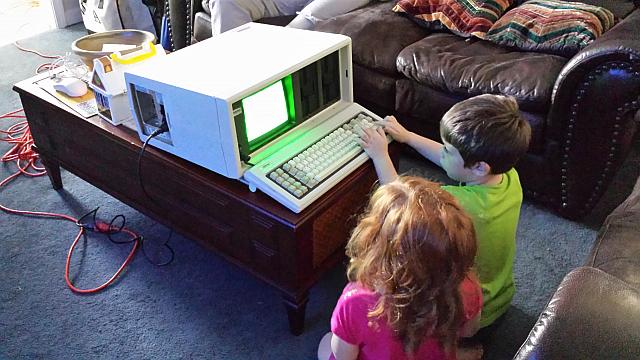 Got a couple other games for it. I’d read up on some of Sierra’s early games being written for CGA, displayed on an NTSC-timed composite TV. Had a poke about at the composite-out, repaired one of the issues it had: 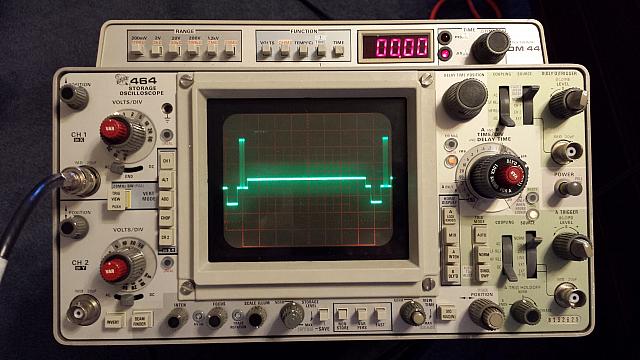 The vertical stripes found in a lot of their games serve a purpose- on an NTSC TV set the timing quirks cause other colors to appear. Not bad for a 4-color output: 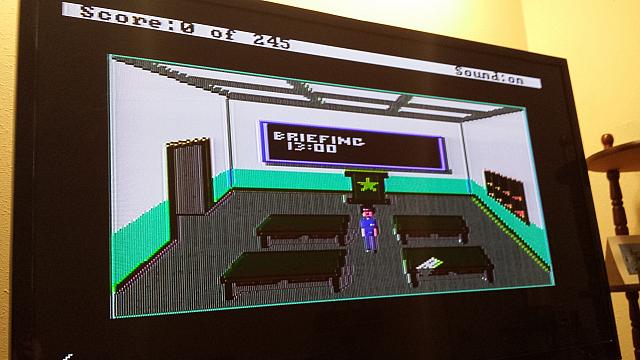 The Apple ][ used the same tricks to cause NTSC color. This is why the PAL versions were monochrome. You can’t screw up PAL and make color.

So.. that wasn’t enough. I had a dig about in my stash of old computer junk and found me a network card. A 3Com Etherlink device, with the old thicknet AUI connection, a co-ax for thinnet and- joy- twisted pair RJ-45 jack. Got it set up, discovered that only the 8-bit portion of the ISA slot is used for data throughput. Utilizing the wonderful mTCP suite, I present to you… an 8088 online! IRC, anybody? 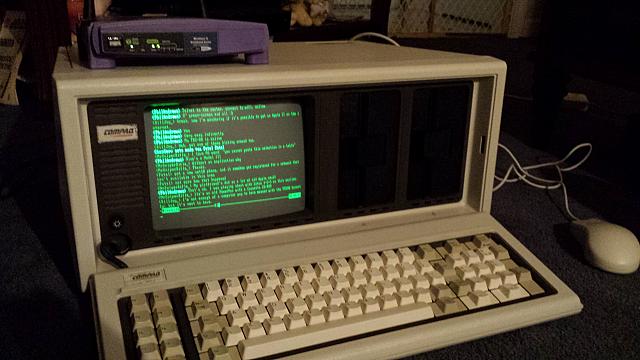 Of course, that also wasn’t enough, so an old router (on top of it in the last picture) was flashed with Tomato and set up as a WiFi bridge. It was then set up to be put inside.

I built a PWM circuit to automatically dim the lights in the panel I made up to fit in the front. 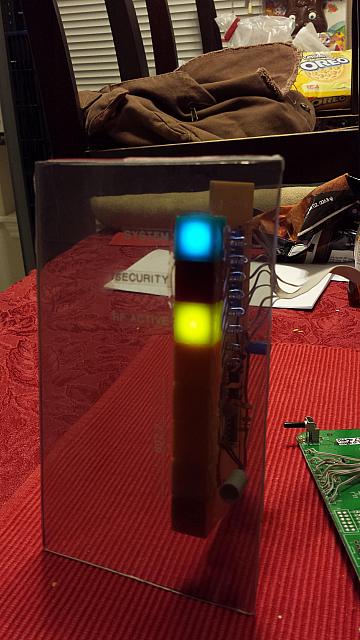 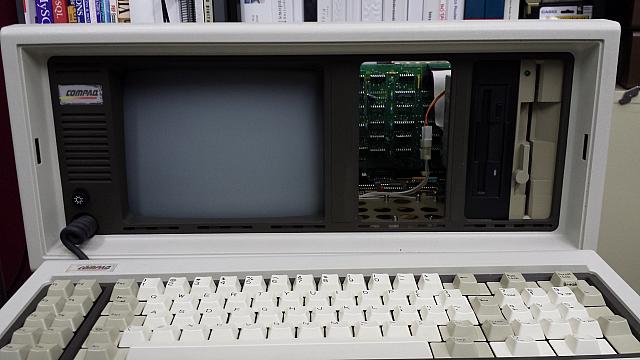 Stripped down the 5.25″ drive, fitted red LED’s in both to match the originals and painted the beige plastic satin black: 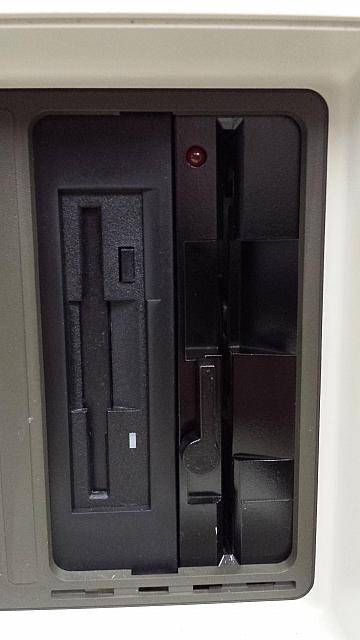 Fitted up the light panel, wired the router in. Looks real neat. 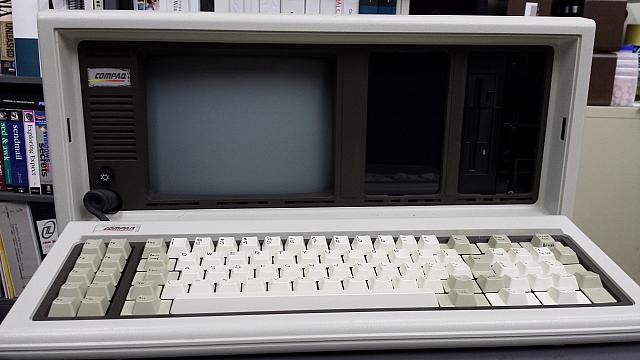 Powered up, it looks as though it should have been there. Plus, you can’t go wrong with blinkenlichts. 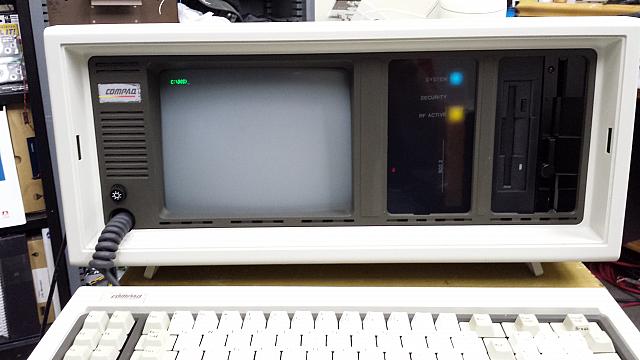 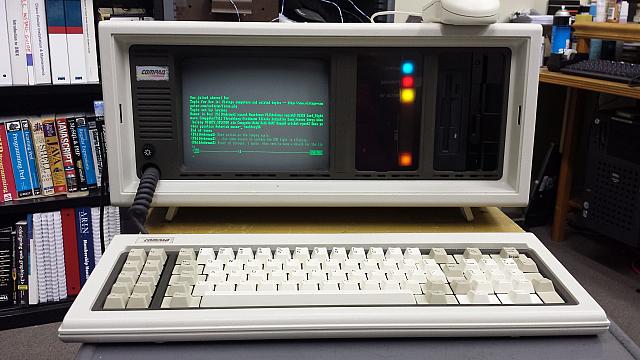 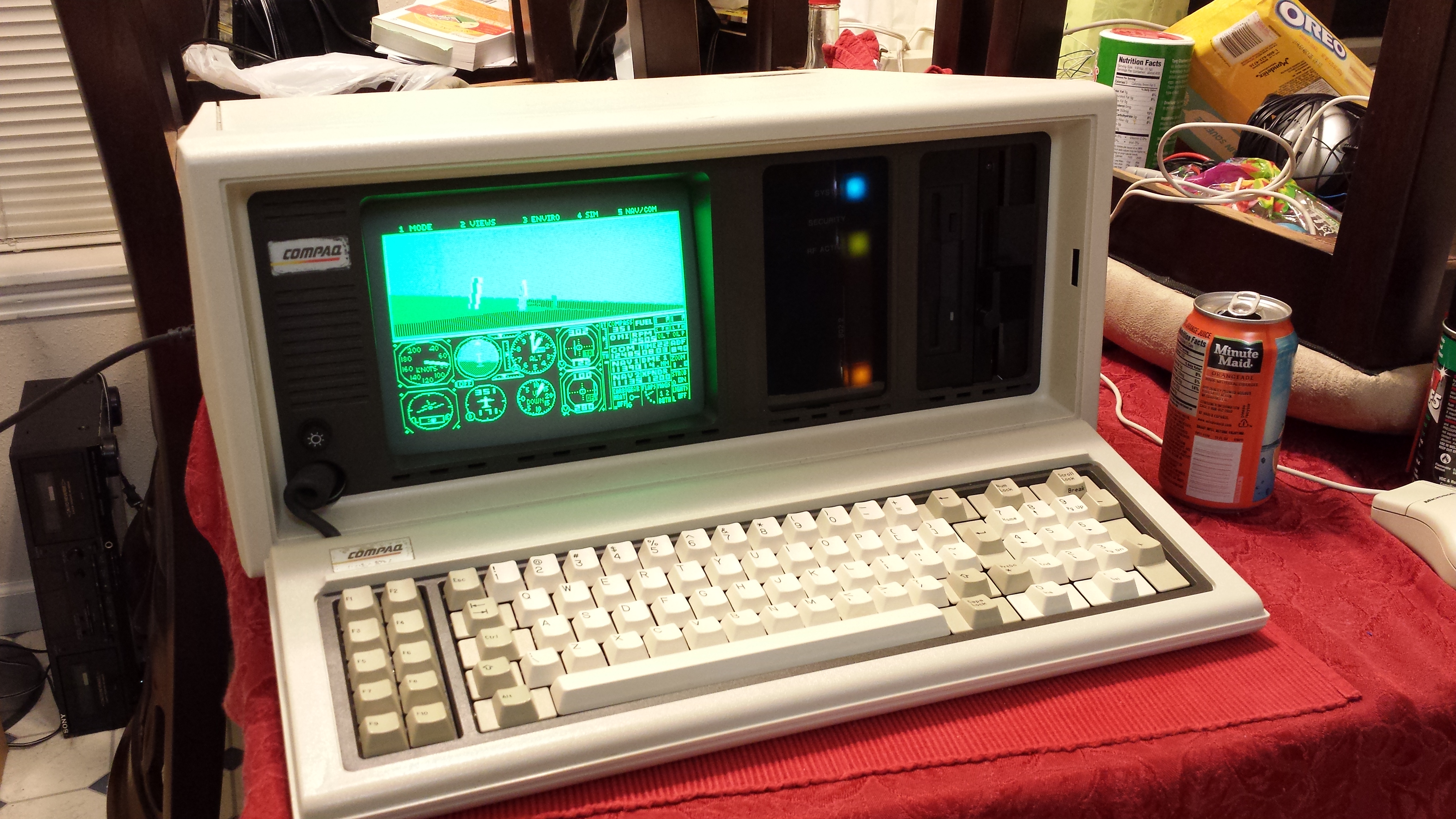 One day, I shall bring it to a Starbucks and confuse the MacBook-turtleneck-beret crowd. I’m a geek.