After the previous discovery that the -12V rail was collapsing under load, I read up on the datasheet for the 8080A processor. It states that the voltage rails must be brought up in a particular order (-5, +5, +12) and if the -5 is missing then there’s a very high chance of damaging the processor. The 8085 negated this and required a single, positive power source- the 8080 has strict requirements.
The 4116 RAM states that it should be brought up with the -5 first then the +5 and then the +12 but any of the rails missing should not cause damage to the chips. Bonus there.
So, I decided just to fling a processor at it. For $4 a pop, I decided that it was worth a shot, having fixed the power supply.

Same behavior upon power-up. At least I have a couple spares now.

Pulling the video RAM does show a different pattern on the screen so that at least is moderately positive- it initializes the memory in the same fashion each time it it switched on. Pulling the CPU and I/O cards and powering up the video card only liberates a solid beep, no crackling warbles. 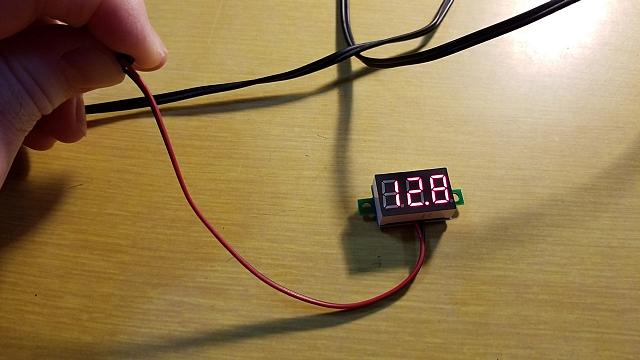 Bought some little voltmeters from China- self-powered with internal self-regulated reference. They work from about 2.5 Volts all the way up to 30 which is impressive.

Also, bought some red transparent acrylic to serve as a mounting plate and to act as a contrast-improving device for the displays.

Marked up, cut with a hacksaw to size and sanded down smooth. Gently heated it up with my butane torch and bent it into a shape that stands up by itself.

Measured up for the meter locations, drawing the positions on the front in Sharpie.

Spread a thin layer of PVA glue on to each meter. It’s nice because it dries clear and doesn’t attack the plastics.

Five meters stuck on and waiting for the glue to dry.

Trimmed the wires down to length and soldered on a length of multi-core wire, and using a spoon as a heat shield, added some heat shrink tubing to each join.

Soldered some test leads onto the other end of the cable and marked them up as to which is which.

Got everything hooked up onto the appropriate locations on the PSU.

With a few labels to show what’s what (and a couple others because I got carried away) the output of the PSU is monitored fully. Everything is in spec, all loaded down with all boards fitted. Now that I have this set up, I’m happier in the knowledge that everything is doing what it’s meant to in terms of power.

Next up, pulling it all out of the chassis to get the analyzer clipped on properly.

Back to the house, I bought a new 4′ Lithonia light fixture to replace the junky Lights of America one that refused to light one tube and barely lit the other. Wired it up, fitted the old 25W tubes and flicked the switch. Nice bright light with instant start, too.

Recapped a TV for someone at work. The ventilation grilles at the back had become lodged with dust due to the location it was kept in (TV stand with no access to the sides) and as such, had cooked itself. Uprated the heat ratings of the replacements (all the originals were 85C, the new ones went in all 105C with a few in really warm locations at 135C) and ran it for an evening. Worked well.

Traded the Challenger in against a new vehicle- Jeep Grand Cherokee. A bit more practical than ferrying the family around in a 2-door muscle car.

Changed the ignition amplifier in the Renault and also a new distributor cap and arm, along with the crank position sensor. The CPS was at fault causing the non-running but the ignition amp appears to have been a bit marginal because it has a lot more torque now. Also, the power steering has stopped leaking and is holding fluid. The gearbox is leaking though, along with a weep of coolant onto the exhaust manifold that I need to find the source of because it smells when I start the car up. Other than that it is actually working moderately well.