I decided that I had wanted to give myself a little bit of mental exercise so I started work on the Lanier again.

This began by dumping the thing on the table, pulling the CPU card out and trying to begin modeling its schematics in KiCAD. This is slow, problem-riddled (the board traces go back-front-back-front and are difficult to follow).

Made a decision to power it up after far too long sat up doing nothing. Pulled the PSU out and brought it up slowly on the Variac. 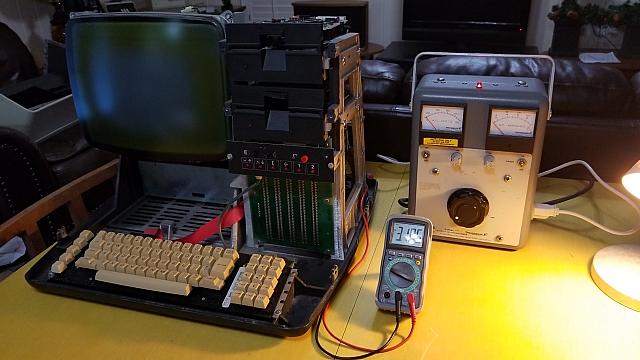 Same old nonsense, the thing didn’t do a whole lot of anything to begin with, a bit of a beep, floppy drive lights on. Hooked it up to my new logic analyzer on what looks to most likely be the bus on the backplane.

There’s a bit of life, and the behavior begins to change. The floppy drives begin to clatter and rattle. I solder a bypass onto the video card to make the screen always show what’s on-screen (blanking bypass) and it’s got some nonsense changing here and there, occasionally filling the screen with alternating patterns. 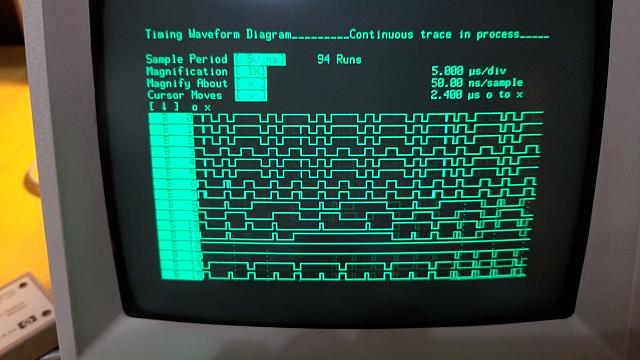 The logic traces look “dirty”, there’s a lot of glitches and the machine in general seems rather unhappy.

Some of the random content on the screen can be moderately amusing though.

Right around this point I was contacted by a guy in Ireland who used to service these things, still has one, schematics, discs and spares- everything I thought I’d never got for it. He says it’s a real early model with the screws holding the case on at the sides (probably circa 1975).
His suggestion was check the power supply, because random freaking-out type behavior is normally bad power.

I pulled the PSU and checked the voltages present. Everything was where it was supposed to be. Plugged the boards back in and same problem. Started to probe voltages on-load and found that the -12V rail had dropped down to +0.4V which is rather odd. Put a light bulb across the rail- it flashed then went out. Pulled the video card out and the rail stayed stable.

The RAM in the machine was all 4116, which requires +12, +5 and -5V supplies to work. I had replaced the CPU board with 4164, which needs only +5 so that cuts down on heat and current requirements significantly. The video board still uses 4116 so would definitely not be working without -5, which is derived from the -12 rail. The circuit is rather simple, a diode to the -12V rail, through a 330 Ohm resistor and the other side of that held to a stable voltage by a 5.1V Zener diode. I pulled one leg of the Zener off, removed all the RAM chips and put the video card back in and powered the machine up. The screen filled with [] symbols, which was expected as the RAM is not present and all lines would remain at zero. The -12V rail stayed stable also so the Zener was suspect. I’ve had them fail in the past and turn into almost a dead short. Found a temporary replacement in my box of stuff (half the Wattage rating but OK for a temp try).
Back into the chassis and still the -12V rail collapses. Start tweaking the crowbar adjustment and manage to get it to an unhappy -11.5V before it would just trip out over and over. Turn the PSU over.. and the -15 rail, which the -12 comes from.. is the only line I’d not replaced the main filter capacitor on.

It’s all leaky up top, the vent is showing signs of having vented out. Not good. That’s most likely going short, drawing too much current and when the boards are added to that draw, the over-current crowbar is kicking in and shutting the rail down.
I had a dig and find a 15000uF, 50V capacitor with clip lugs. Soldered that in on short flying leads and powered the PSU up. -12 rail is at 12.04V, -15 at 13.3 unloaded so I adjusted them and then hooked up the computer boards. Made a slight tweak to all the voltages and got them within 0.01V stable.

There’s still something that’s not happy because switched on cold it beeps (with a somewhat crackling warble modulating the beep) and the drives click. Once it’s been on for a while it begins to not beep any more and it still goes a bit haywire but at least now I know that the main supply is good. I need to order the correct screw-in capacitor and a higher Wattage Zener for the -5 rail supply on the video card, but this is positive progress.

Despite the little set of ceramic capacitors I put in having a combined value in an acceptable range for C1, it would appear they were either breaking down or otherwise incapable of sustaining the horizontal frequency of the screen scan.

So, a different set of capacitors was used and that brought the screen back to life.

That appears to overall conclude the work on this machine.

Very short-lived, this one. I took everything apart and adjusted up the screen so it was central.

Set it on the side to do a bit of a burn-in test, and the decoupling capacitor for the horizontal yoke let out all its magic smoke, the screen went a bit funny and I switched it all off quickly.

Decided to build the little capacitor network suggested in the manual, of several ceramic capacitors in parallel to build up the capacitance but reduce the ESR.

Put it back together and again we have screen but.. the horizontal isn’t aligned any more. The two interlaced pieces of the screen, all stretched out – do not line up.

I’m going through the schematic, I’ll check all values and make sure that the capacitor failing did not draw too much current through the flyback and fry one of the windings.

I decided that the wobbly-screen Macintosh needed to have a bit of work done to make it a bit more trustworthy and reliable. The electrolytic capacitors had been installed in it since 1985 (8113th device produced in the 24th week of 1985 in Fremont, per the serial, so a real early 512k).

Took it to pieces after ordering a bunch of spares (total about $15, so not bad), with the replacement caps rated at least one voltage rating over what was fitted and 105C rather than 85C as fitted originally to try and keep them a little more stable.

Not many capacitors on the logic board, though it is a 4-layer PCB so extra care had to be taken. I’ll give them this, it’s a well made PCB.

Tried to keep the solder-work neat. Don’t think I did too bad a job, to be honest. 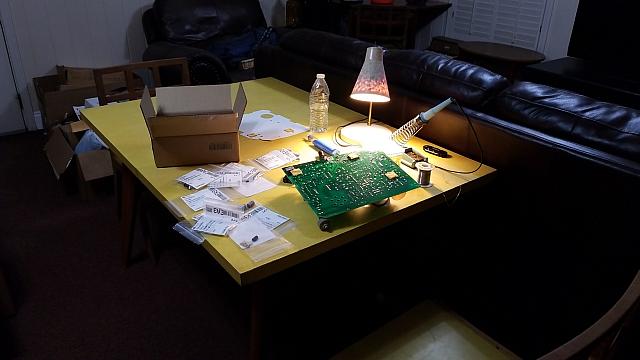 Got stuck in doing the power and sweep board, which has the majority of the capacitors.

First test, and things were promising until the brightness control decided to stop working.

Turns out the center carbon track had completely fallen apart. Checked the schematic, fairly standard 16mm 1MOhm linear pot, so went on the hunt for something similar in the electronics catalogs online.

Closest modern variant I could find. The board is the right size and the connecting pins the correct length, important in this application because of the way the computer is assembled.

Carefully undid the new piece, as the thing was essentially backwards from how it needed to be.

This side is where the old one had the handle coming out. I removed the crimped section and split it all down, had to file the ears of the board a little to make it fit but managed to put it back together again, and have it test good and smooth operation across its range of travel.

Put that back in the circuit and the brightness is now adjustable again. Checked the voltages and the 5V rail (the master) was a bit low at 4.72V so that was tweaked up to 5.00V. The 12V rail, slaved from it sat happily at 12.2V so that’s all well within limits.

The screen became a bit intermittent- traced that eventually down to a couple broken solder joints on the connector to the end cap of the tube.

All up and working again. Need to adjust the centering of the screen a little, I think I must have knocked the centering rings when I put the wiring back in. Overall, a lot better than it was.