It’s been a ride fraught with annoyance and broken things, this one.

Mind you, considering that it’s been shelved for so long it’s a surprise that anything works at all.
Decided to carry on with things, and as the entire computer is fairly modular, pulled the VDU module out. 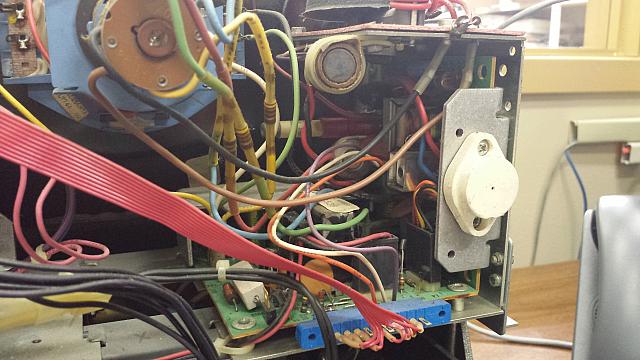 It’s buried somewhere in the mass of wires going to the CRT and yoke. 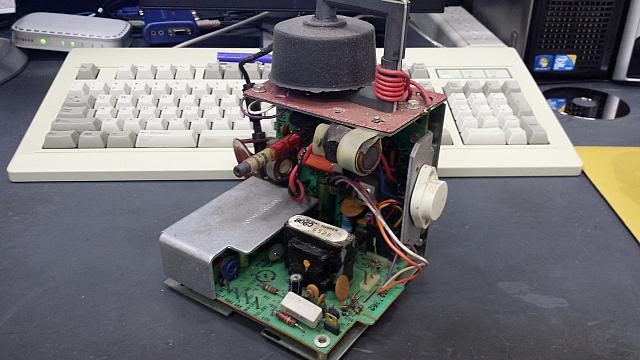 Removed, it’s fairly sensible. Two boards, mounted at right angles, with the flyback transformer up on top, potted in some sort of silicone rubber. 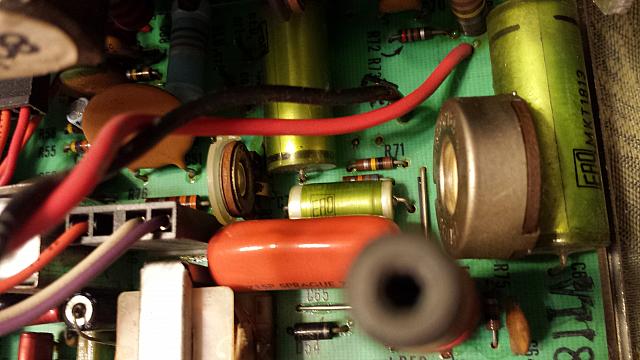 It’s built from some fairly high grade stuff, stamped Motorola. The green capacitors tested good but were replaced anyway with new film caps of the same or better specification. 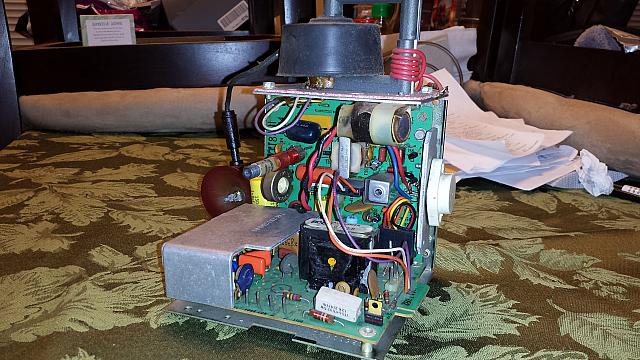 New caps installed (hard to see) and ready to go. 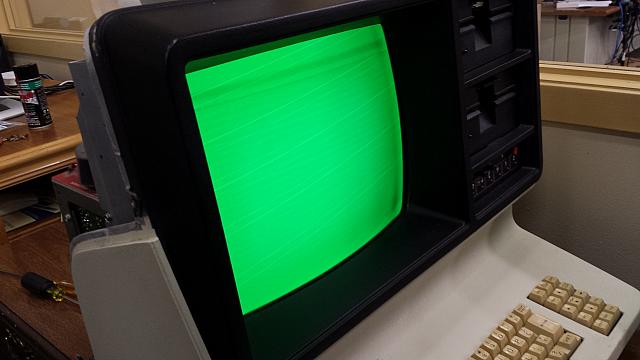 Powered up and met with a much brighter raster, however still nothing resembling information on the screen. Not even junk and trash. 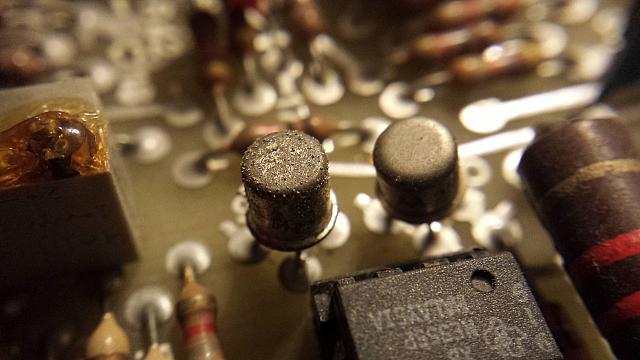 Some of the transistors have tin whiskers. Luckily they are all 2N2222A so have cheap modern replacements in plastic. 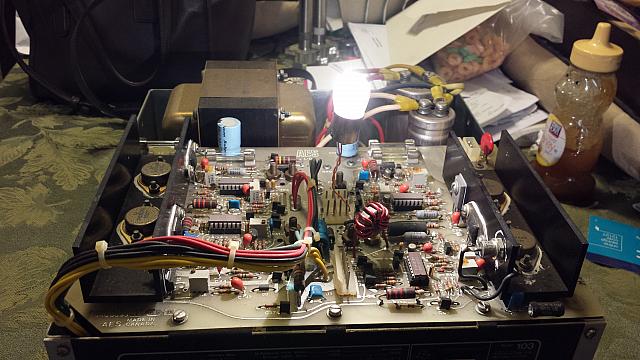 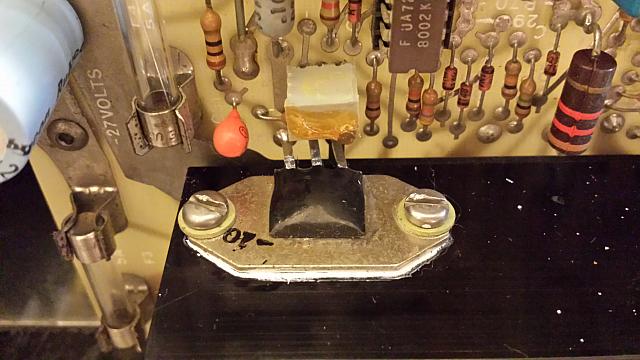 Traced everything out, accidentally put a transistor in backwards (old vs new case EBC CBE mixup) and it seems to have finished off this device, potted in the same sort of rubber the flyback is. 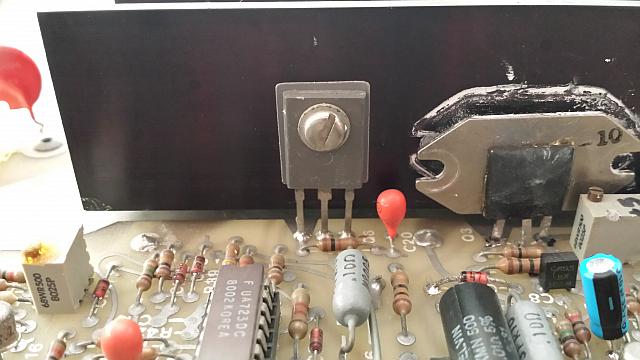 After research, this appears to be a 2N4441, a silicon controlled rectifier- a thyristor. It’s used to shut the current off in case of an overload current draw. I think the one hanging off is a higher power version, and it’s been having troubles and gone short.

I’ve ordered a new filter capacitor (10,000uF 40V) to replace the original and a new thyristor with as close to the specs but higher current capability to the 2N4441.

This will either kill or cure the +5v rail. If it cures, we may have life in the boards yet.

I have somehow managed to do it again. 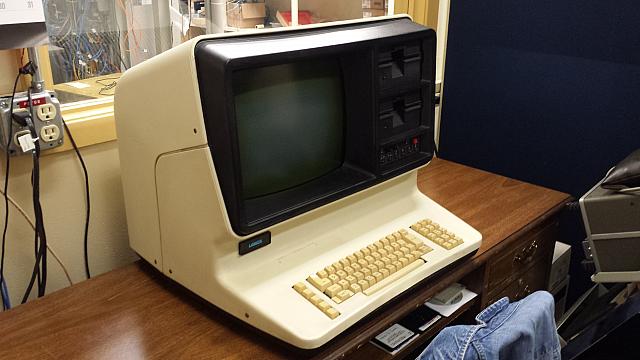 This.. mildly ugly device is a Lanier Model 103.

I’ll be honest. Before I saw this thing sat on top of the (remarkably) dusty shelf I had never heard of Lanier. Apparently they were the number one go-to for office automation products in the late Seventies and early Eighties. They are still making things.

It was designed as a dedicated word-processing system. No other function. As if you’d bought yourself a typewriter. All it is ever going to be is a typewriter. 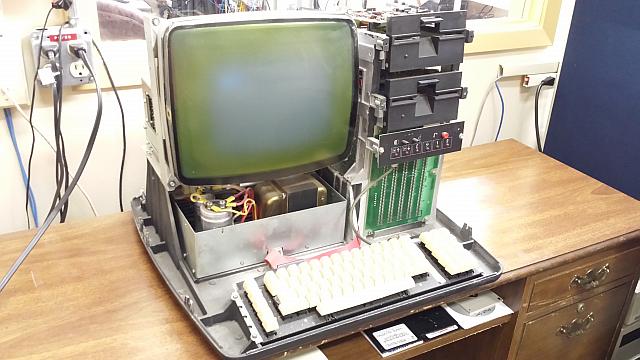 It was under some disintegrated plastic sheet. First thing that happened, after it was hauled onto the top of a set of wooden steps, wheeled carefully to the end of the aisle, shoved onto a pallet on the forklift and lifted down was to put the floor broom to it and clean the top off.

Once it was manhandled to the desk, it was pulled apart, the camera on my phone was inexpertly set and some pictures of it were taken.
The bottom is made from the chassis of a Challenger tank, the top is (evidently to save weight) fibreglass. 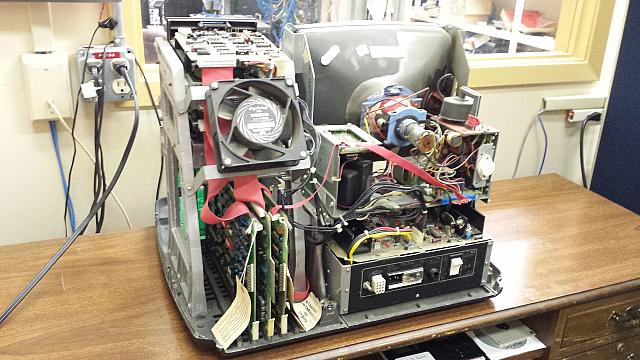 It comprises of a few other things.

1) A power supply, built from the substation of a small factory
2) A green screen CRT, with an implosion shield that’s beginning to cateract and turn green around the edges
3) Two Shugart 5.25″ hard-sectored floppy disc drives
4) Three cards, on a backplane
4a) Video card
4b) I/O card
4c) CPU card 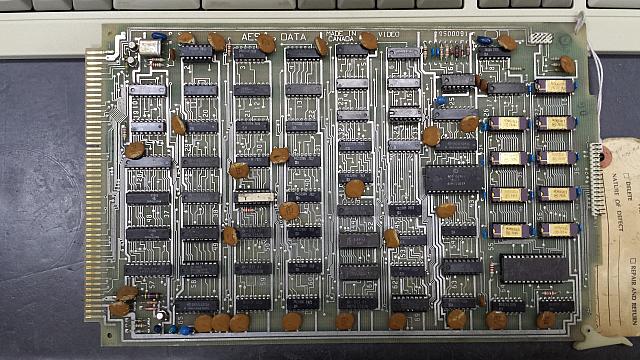 This is one of them, the video card. Made almost entirely from 74-series logic.

It had unfortunately been eaten in part by some sort of creature. 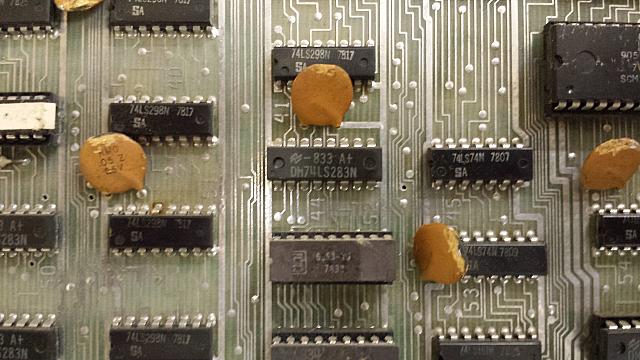 Despite this, decided to gingerly bring it up on the Variac.
Nothing went pop (surprisingly) but the only thing it would do was produce a completely blank screen, and a rapidly disappearing dot when it was switched off. 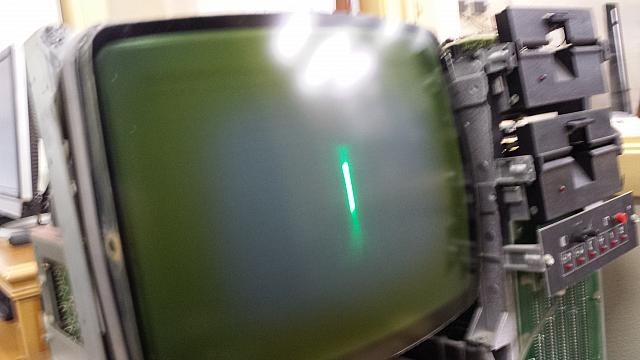 So, electronic gubbins were ordered. Today they arrived. 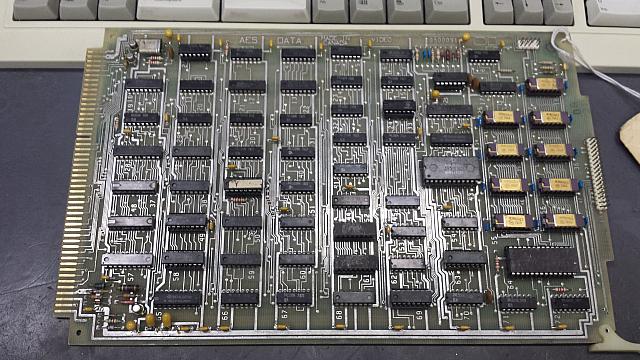 The new pieces are considerably smaller than the old ones, despite actually having better specifications. 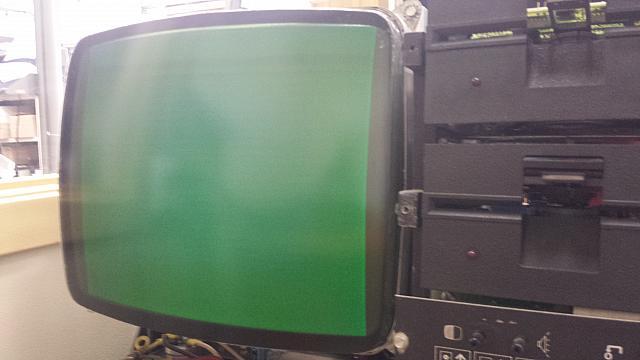 We now have a raster, which is a happy thing. That means that the high voltage, vertical and horizontal sections actually work. The lower floppy drive goes click when you turn it on; if it’s attempting to display anything, it’s probably off the top of the screen, the raster is very stretched out.

Next up, video control circuitry and power supply.