Having fitted the air cleaner assembly to the engine to test, I decided that there was no time like the present to finish cleaning it. I had done the main body but had the air cleaner element and the oil bowl were still dirty and as-found.

The caked-on dirt- very fine prairie dust mixed with decades-old oil had done a moderately good job of protecting the metal from corrosion but it was time to clean it up and use paint for that purpose instead.

All the dirt came off with some elbow-grease. The metal is in good shape for its’ age.

The outside was given a coat of etch primer, after having been wiped over with rust converter.

Final coat in black enamel. It hardly looks black, it reflects so much light. This enamel gives an incredible gloss straight from the spray-can.

Again, it came up remarkably well to bare metal with just a wire brush.

All of the original filter mesh was gone. I’m not sure if it was cotton wadding type or steel, but some mice had been in there and had left none at all.

The inner element assembly is visible from the outside, so again, primed and painted in gloss black to match the rest of the assembly.

All together and looking rather good, for the first time in many years.

I adjusted the mounting bracket that I had made, having seen a photo of a factory install. the filter sits almost directly over the mounting stud, with just enough clearance for the water pipe to the top of the radiator.

Next up, I did a little research and found that only the later Trico model screen wash brackets were blue. The early ones were plain mid-silver.

I chose a very pale blue instead, keeping the the car’s “blues” theme.

I experimented with some new paint colors. Off-the-shelf is a poor match for any bodywork colors on the car. On the left of the arch, by the washer frame is French Blue. On the right is navy. I think the navy will possibly tie in better because it’s close to the color of the roof.

I bought a used washer pump/bottle off eBay for a good price. It was complete and looked to be in good shape. I took it apart, found the seals to have dried up over the years. Pressed them flat again and cleaned it all up.

The outside of the jar was covered in under-seal over-spray. It was left to sit in gasoline for a couple of hours and it all wiped off.

Keeping with blues on blues, it was filled with fresh screen-wash and tested. It works in a strange fashion- there’s a spring-loaded double-ended plunger into two separate cylinders. Vacuum is applied to the top cylinder and the piston moves up, bringing the lower piston up and drawing fluid in from the jar. Release vacuum and the spring pushes it back down, expelling fluid from the top pipe in a stream until the piston bottoms out.

Next “new” item was a radio set. the car did come fitted with a radio but it was a “modern vintage” style tape deck. First, it didn’t fit, second it was missing a dial knob, third it was ugly. I decided I was going to retrofit the original AM Sylvania/Delco radio. They pop up on eBay from time to time in varying states of disrepair. This one looked moderately good and had the correct dials to match the rest of the dials in the car. There are four variants of knobs that I’ve seen, depending on what model variant you bought. Plain black plastic for the basic model, black plastic with a silver insert for the standard, silver outer with a black insert for the Deluxe (what mine has) and all silver (I think for the Catalina Coupe).

Disassembly of the unit was straightforward, just a number of 1/4″ bolts and a few nuts holding things in place. My idea was to gut it and fit something modern if it was in bad shape internally, or refurbish and restore if it was in good shape.

Inside, it’s in really quite good condition. It’s pre-PCB so all the components interconnect each other and solder directly to the chassis in places. The tuner was jammed up solid.

All the moving parts were lubricated. The tuning mechanism was then free to move, including the preset buttons. Unfortunately the metal case that holds the tuning coils has what is known as “zinc pest”, where lead impurities in the alloy react and cause crystalline fractures to grow. The metal then becomes weak and breaks like shortcrust pastry. It has expanded a little and bent out of true but for now isn’t too bad.

The rear of the case is painted silver and is in very good condition. the front had been painted black and was covered in surface rust. I sanded it down with fine grit paper on my DA.

Back to solid, clean metal. Most of this will not be visible as it is mounted behind the dash, with just the chrome dials and scale showing at the bottom. The sound passes out through the large circular grille in the middle of the dash.

It was given a coat of primer and then a coat of satin black paint, to match the original finish.

The speaker mounting screws would have been untreated steel originally, and as such had also gone rusty. I scrubbed them down with a wire brush, cleaned them further with ionic removal in a salt/vinegar bath and then plated them with copper.

The copper coating was then given a nickel coating to protect the screws and give a modestly shiny surface.

The dial knobs were very grimy.When the set first arrived, a cursory glance looked to be missing chrome in places. It turned out to be thick dirt, all of which cleaned off with a wire brush.

I test-refitted the front panel, bezel and knobs. Looks much better than it did.

I turned my attention back to the circuitry. It’s a bit of a mess of seemingly randomly-placed components but there is a degree of logic to the assembly. I had started to measure some of the values (the Rider manual uses M notation for resistance in the k scale, and Meg for M) and quickly discovered that my tube meter was not functioning.

I took it apart and had a poke about. The tubes both lit so the heaters were all good, there was voltage at the plates and no signs of any stressed components on the board. I twiddled the calibration pots but that was not the problem. It ended up being a poor contact on the connection to the meter. There’s a battery in the circuit that gives a permanent positive bias and that had made the brass peg of the meter’s terminal corrode slightly.

After having given a very brief run-through of my VTVM, I realized there’s a bit of explanation missing.

Why would I want to have a fifty year old piece of test equipment sitting on my bench? Why not a nice new digital multimeter?

Well, there are a few simple reasons, and the’re mostly based upon what a digital meter does.
I do have a digital multimeter, and it’s a very nice, versatile tool. It provides me with easy to read, auto-ranging Volts, Amps, Ohms, capacitance, frequency, diode testing but to name a few functions.

That sounds wonderful, and in all essence it is. However, a trip down memory lane is in order. In days gone by, if you wished to measure a voltage, you’d place a calibrated moving-coil meter across the points to measure, and the deflection of the meter needle against a scale would give you a reading. My VTVM has such a moving-coil meter attached to its faceplate.
However, in order for the meter to move, it must pass a current. My VTVM’s meter is “200 micro-Amps to full deflection”, which doesn’t sound like a lot (and in the grand scheme of things it isn’t really) but that current draw is too much to measure sensitive circuits where 2-3 micro-amps is all that’s being dealt with. Connecting a regular meter across the circuit would present it with an effective dead short, killing what you were trying to measure. Or, at best, it’d make the reading highly inaccurate*.

Examples of such circuits are radio-frequency tuned circuits, where the signals being tuned into are miniscule. What is needed is a method of connecting a meter with a very high resistance- so high that the circuit to be measured hardly “notices” it. But, a very very high resistance meter will pass next to no current, and wouldn’t move. Enter, the vacuum tube amplifier.

(For those of us young enough, vacuum tubes are.. er, a bit like glass transistors. Er, yeah. That’s a poor analogy, but it’ll do for now.)

Vacuum tube amplifiers do what the name suggests. They take a small signal and make it larger. In some cases, they need to pass virtually no current in order to operate. See where we’re going with this? Sure. So, if we connect the vacuum tube amplifier up to the meter, a tiny little signal can be made to make the meter move.

That’s basically what is done. A very high resistance is placed between the testing probe and the amplifier (in this meter, that’s 11 Mega-Ohms, or 11,000,000 Ohms) which is an improvement over the resistance of the meter’s coil (about 200 kilo-Ohms, or 200,000 Ohms).

This will lead on to a little very basic vacuum tube concepts and amplifier theory. But, for now, that’s basically why it’s used. Also, all the old manuals I have are marked out to be measured using one of these devices. If I connect my digital meter.. first, it can only read up to 2.0 Mega-Ohms before it goes off-scale. My VTVM can read up to 1,500 Mega-Ohms. In fact, my VTVM can measure the resistance across my digital meter (about 8 Mega-Ohms).

Hence why it’s not in the trash any more. It’s still very useful.

A while ago a friend of mine saw this bring pitched away in back of a goods recycling place (sorry we can’t accept electronics). 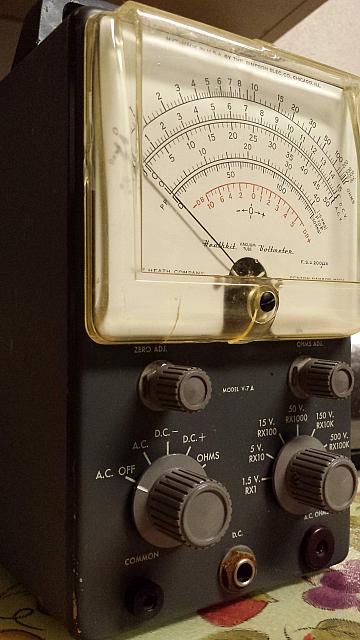 It’s a late fifties Heathkit VTVM (Vacuum Tube Volt Meter).
I’d been on the lookout on and off for one for a while, so of course, this was a welcome surprise. It was very dirty- pictured above I’d already cleaned it and polished the face. 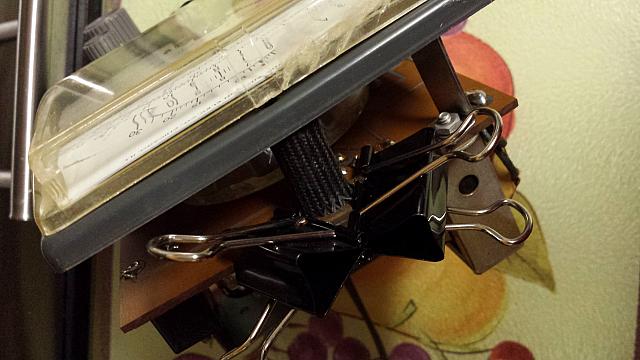 Inside wasn’t too bad really. Gave it a rudimentary clean-up. 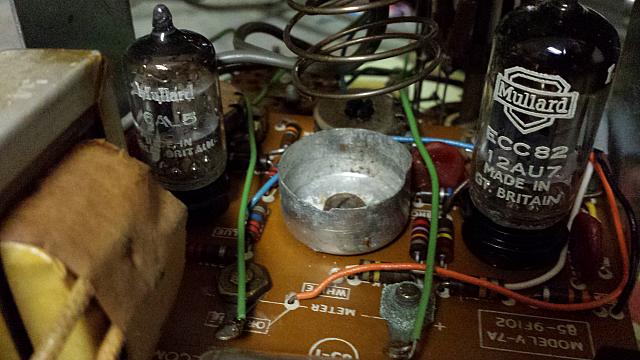 Powered up, this is all it would do. Pegged to one end of the scale. 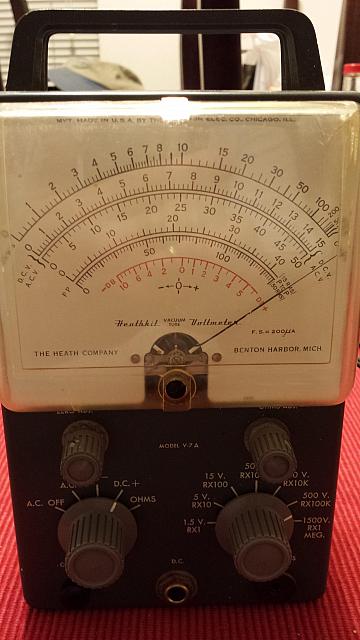 Found a few resistors that had gone high value with age. Shotgunned the lot, and was greeted by a nice zero. But, that’s all it’d do. 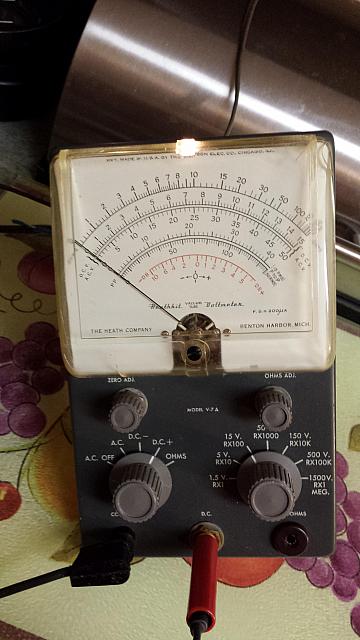 Dug about a little more and found a cold solder joint on the amplifier tube. Tubes run warm.. so, gratuitous vacuum tube shot: 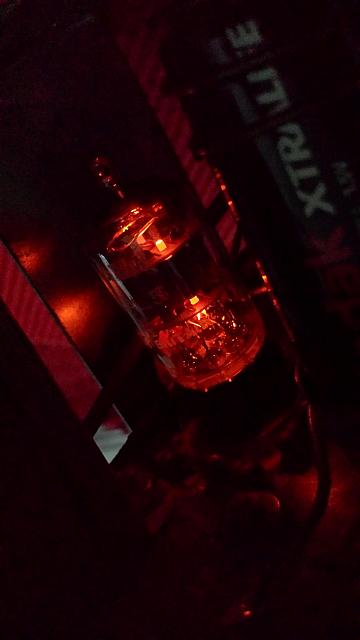 With that done, it was tested using a 9V PP3 battery. Right on the money. 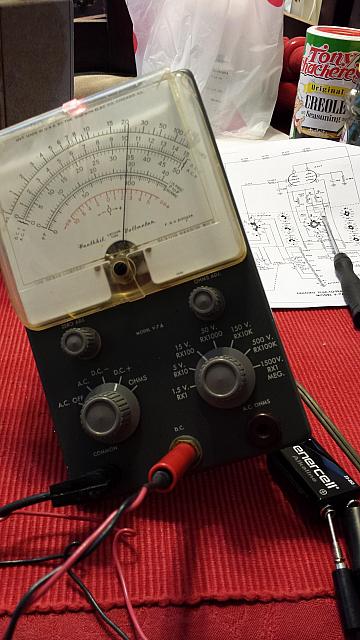 Buttoned it up and bought some new leads for it. Nice working meter now. Not bad for half a century old.