A brief bit of troubleshooting today. Upon starting the HP up, I got a click from the speaker. The voltages were out of whack but not horribly so.

Apologies for the terrible photographs. I hadn’t eaten and had the shakes.

Set up on the kitchen table. 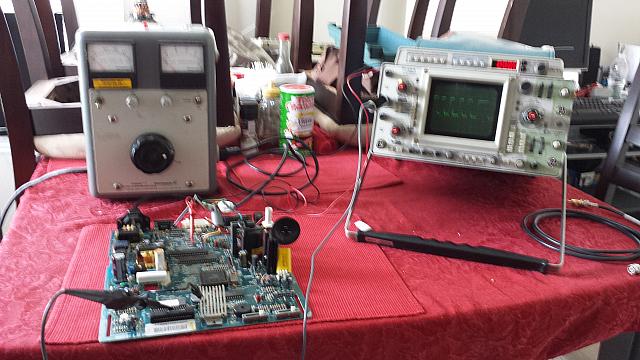 The thing was kinda alive. No bee-doop when it started, but there was life on the pins of the diagnostic connector. REALLY fugly waveforms. 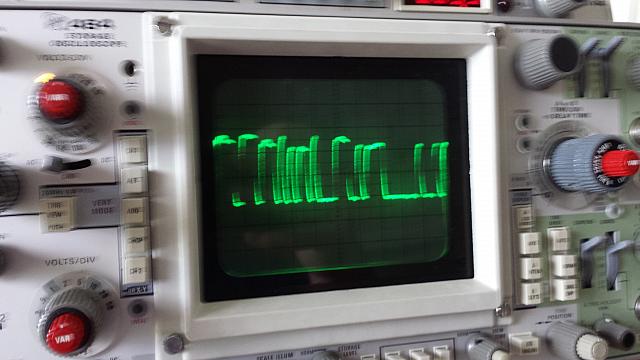 At that point I decided to adjust the timing for the power supply. At that point the +5V rail dropped to 3.4V and it all died. 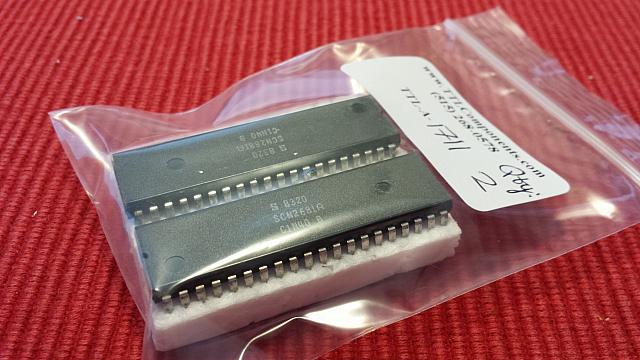 Soldered in. Powered up.

Just a plain raster. No beep. Checked the voltages again and everything’s drifted off spec. The +12 was at +12.7 which is worryingly high. The EEPROM is marked to write at 12.7V

I’m hoping it hasn’t wiped the blasted EEPROM of its’ code- if it has, the entire thing’s trash. I need to go through the PSU component by component. Tried tweaking it. I forget which of the voltages you are supposed to set and the rest are meant to follow.

That’ll be a fairly epic failure then. Something’s gone all burned up and way out of spec in the PSU.

Not a project for tonight. I’m not in the mood for it right now. It’s in the naughty corner again. 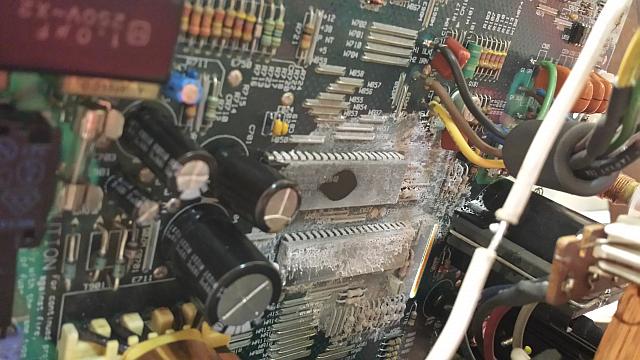 Bought a can of air (Component dusting spray, some complex molecule) at Radio Shack tonight and began dousing various components on the board until I got a good response.
After about five seconds of having been on, this one melted away the frost..

Gave it a good solid spray and switched on again. BEE-DOOP

Nothing useful on the screen but a POST beep is good.

All good and well.. ordered a replacement. Decided in the interim to grab the soldering iron. 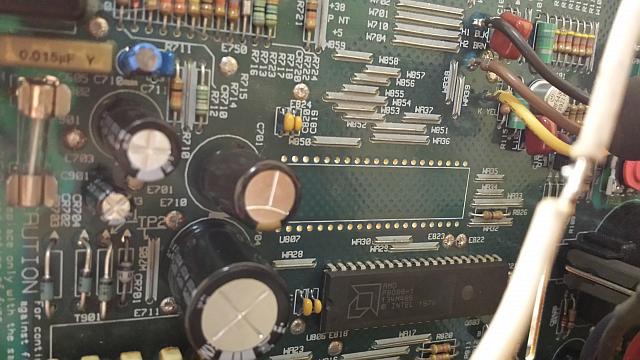 Yup, that’ll do. Tried powering the board up without it in place. BEE-DOOP. 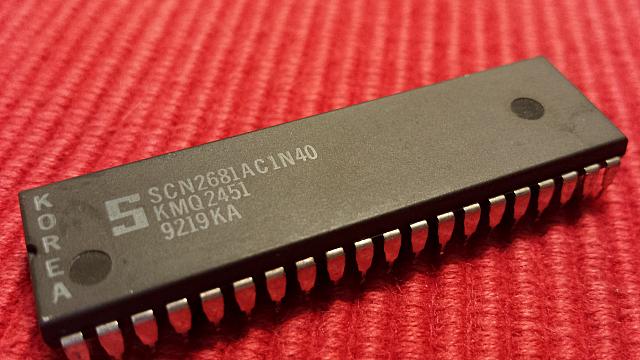 It’s a SCN2681, a dual UART. It sits right up against and interfaces with the 8088 below it and also the funny socketed HP chip also.

Seems to be fairly central to the entire architecture (well, that figures really) so hopefully a replacement will liberate some life from it and allow some trash, or better, sensible data onto the screen,

I’m just hoping that “BEE-DOOP” is a good beep code..

…at least it’s A beep code.

Back onto this after nearly a year of sat under the table. My Wyse burned up another 330k 1W resistor, so that got fitted with a 2W version with good ventilation.. back up and operating my hi-fi playlists.

Decided to turn my attention back to the HP. Decided just to shotgun the electrolytic caps to take that variable out of the picture.

First power-up I got blieurp-BLIIIIP out of the speaker and it filled the screen with stripes. The next power-up it went BEE-DOOP and did nothing… then nothing but a raster thereafter.

Sounds to me heat-related elsewhere on the board- there’s signs that this design runs kinda toasty so I think next up is a can of duster spray on all the diodes and chips to see if I can get it to come to life.

It’s probably going to be a Zener gone soft and bleeding voltage off to make a rail too low. I see several occurrences of 2.7V on the board, which is a strange and un-natural voltage (but then again, so is +38V) so that may be the culprit. It seems to try to work for the first few goes until it gets warmed up whereby it dies.

Someone kindly pointed me in the direction of the HP “Service” manual for a terminal in this family.

According to HP, the recommended course of action is to “replace the main PCB”. Manufacturers have a lot to answer for when it comes to today’s throw-away ideals… it’s not just the consumer.

Horrible photograph, as I was trying to balance the tube (it’s held in by gravity and will alone) and not let the board fall out and not electrocute myself AND take a picture at the same time: 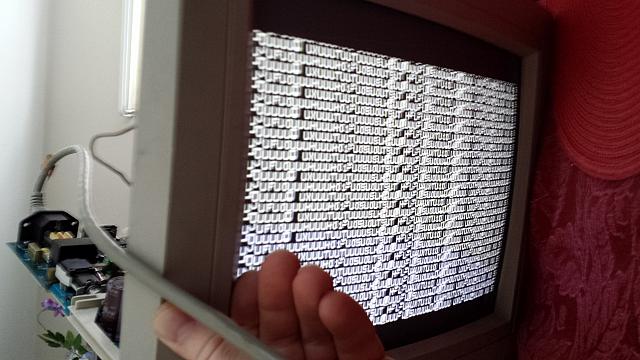 Did manage to liberate this from it earlier. I know it’s the computer equivalent of humming whilst strumming your lips but it does at least show the character ROM is working and there’s a certain amount of life left in it.
It did that twice then refused to do anything else again. Slowly getting somewhere.

Which I presume is an error code (gonna go read the manual) but since turning it off then on again the raster has now shrunk and it doesn’t beep any more. More investigation required. 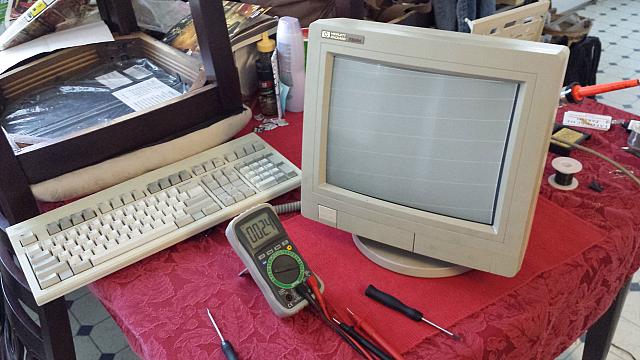 But, have a picture, because, well, pictures.

haha oops. I was using the wrong “ground”, I mis-read the labeling, it was somewhat hard to read with the back of the case on.

Working by the logic that if there’s somewhere reasonable voltages present (at least in the right ball-park) then the power supply is mostly doing alright and the +5 is being dragged down to ground somewhere else in the circuit.

Going to trace the -12 and see if it’s decoupled anywhere.

Looks like this has been a problem for a while because the -12 smoothing capacitor has bulged out. Yuk.

Rescued an HP 700/44 terminal from work today. Going to be discarded so I figured what the hey and snagged it.

Got it home, tried the power on it to check for bangs and smoke. It liberated neither, but it didn’t come on either. No raster, no beeps.

Lifted the board and tube out. Sometime in the past it’s had a repair, the warranty on it was out in 2001. Probed around the power supply section of the board, two of the three 33D diodes tested funny and looked a bit toasty so I de-soldered then and tested them out of circuit. They tested good so went back in.

I’m at a bit of a loss with it. I’ve found the user manual but that’s not much help right now.

I don’t think I can power it up out of the case either because the HT is integral to the board. The cathode heater glows, and that’s about it. Somehow I’ve managed to stop the latch mechanism on the power switch from working also, the power switch is now just momentary…